The Inflation Reduction Act was signed into law on August 16, 2022, excluding the curtailment of QSBS that was included in the House’s version of the Act (the “Build Back Better Act”). As a result, no changes were made to IRC Section 1202 regarding QSBS stock at this time.

Earlier versions of the Inflation Reduction Act called for a change to the way carried interest is taxed, and would have taxed carried interest at ordinary income rates (i.e. 37%), however that provision was ultimately removed from the final bill.

It appears the Senate has reached a deal to move forward with a slimmed down version of the Build Back Better Act – however the provision to curtail QSBS was not included in the text. We are continuing to track developments and will provide further updates as they become available.

The most recent update to the Build Back Better Act released on 11/3/2021 (available here) includes the same QSBS amendment introduced in September, however it alters some of the related tax code provisions involving “high earners”.

Based on our calculations, the current framework would create the following differences in effective tax rates between a non-QSBS gain and a QSBS gain at various income levels.

If QSBS is meant to encourage investment in the riskiest business ideas at their earliest stages, the question will follow for investors and entrepreneurs whether or not a 6.9% potential tax savings is adequate to foster robust investments in the small businesses that need capital the most. Read more here.

The tax reform proposed by President Biden back in April that would fund the American Families Plan and American jobs plan included no proposed changes to QSBS. The proposal stated, “Finally, the exclusion under current law for capital gain on certain small business stock would also apply.” QSBS holders rejoiced at this continued protection of a tax code that promotes investment in small, innovative businesses and rewards investors with up to 100% tax exemption on the capital gains of said stock.

However, the Build Back Better Act is currently being marked up by the House Ways and Means Committee in effort to get the bill passed with a simple majority. The alarming revision is included in an amendment to the bill, amendment section 138150 (see page 628 – 629; copied below for reference). 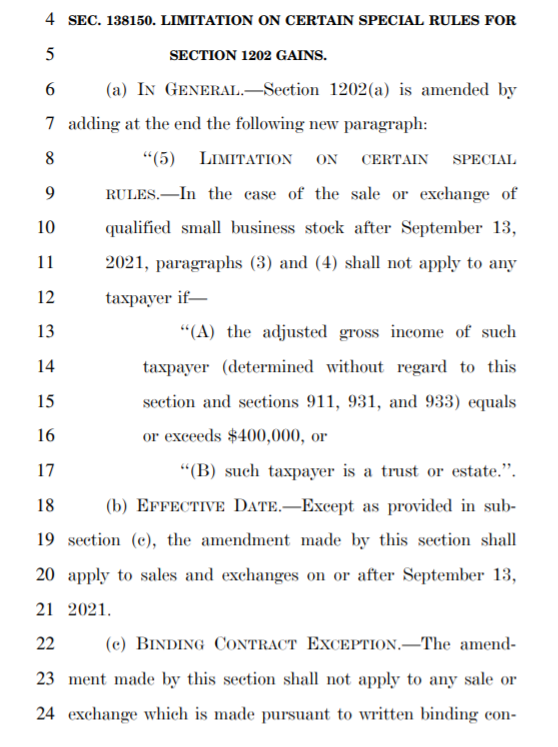 On October 28, 2021 President Biden laid out his case for a scaled back version of the originally proposed $3.5T Build Back Better Act, reducing the cost to $1.75T.

The text of the bill details the full list of “pay for’s”, including keeping the amendment to make the Qualified Small Business Stock exclusion based on Adjusted Gross Income unchanged from the bills initial release in September.

If approved by Congress, the bill would likely move to the Senate for further revisions.
Refer to the “RULES COMMITTEE PRINT 117–17 TEXT OF H.R. 5376, BUILD BACK BETTER ACT” at https://rules.house.gov/sites/democrats.rules.house.gov/files/BILLS-117HR5376RH-RCP117-17.pdf (see page 1645 for the QSBS amendment).

What does the bill say regarding QSBS?

As written, this amendment would mean that for any capital gain earned after September 12, 2021, the QSBS exemption would be limited to 50% of the gain in the event that the taxpayer recognizes an annual adjusted gross income greater than or equal to $400,000. This change would also apply to a taxpayer which is a trust or an estate.

We also understand the revisions to mean that the Section 1202 100% exemption will remain intact for taxpayers whose AGI is under $400,000 with a limit of $10 million or 10X the adjust basis, whichever is greater. If the bill were to pass as is, it would revise the way the QSBS exclusion percentage is determined. Currently the exclusion percentage is based on when stock was acquired:

The amendment would change the exclusion percentage to no longer be determined by when a taxpayer acquired the stock, but now would rather be based on their AGI in the year that they had the gain.

How would you calculate the QSBS exclusion if the bill passes?

The QSBS amendment creates an interesting dilemma for the IRS. Currently, the QSBS exclusion is factored in to determine AGI, whereby the exclusion is based on when the QSBS stock was acquired, resulting in either the 50%, 75% or 100% exclusion.  Now with the exclusion being based on AGI, there seems to be a “chicken and egg” problem – you need to know AGI to know your exclusion percentage, however you need to know your exclusion percentage to determine AGI. How can this be?

To solve this circular reference, the Joint Committee on Taxation released a report clarifying implementation details (see item #10 within this JCX 43-21).  Specifically, under “Description of Proposal” (as shown below) the JCT notes “the full amount of such gain is included in AGI for purposes of determining the applicable exclusion.”

Therefore, the total capital gain from any QSBS eligible securities would be included in AGI and the QSBS exclusion would then be calculated after. Refer to this article for further details.

How the amendment could impact different stakeholders?

Startup founders and early employees typically take lower salaries than they could otherwise make in order to build their companies. They do so on the hope that if all goes well, they may be able to realize a gain on their equity which would help supplement the years of lower wages as they got the company going. Under the proposed amendment this one-time gain would be included in their AGI, likely pushing the founders/employees above the $400k AGI threshold for the year of their gain – in effect, reducing their incentive for founding the company in the first place.

Investors may be compelled to invest in more established companies than taking a risk on an earlier stage / less proven business, which could negatively impact the ability of founders with great ideas to get started in the first place and could devastate the venture ecosystem.

As it is written the amendment changes the rules on all taxpayers, including many who started or invested in a company under rules that would provide up to a 100% capital gains tax exclusion, and those rules are being changed on them for the stock they already hold. One startup founder put it this way,

“Trust in institutions is at an all time low, seemingly it can’t go any lower, however, for thousands of entrepreneurs and small business owners any remaining shred just got obliterated…The whole point of QSBS is to allow normal everyday people to take outsized risk with the hope (and “hope” is the right word when you start a new tech company) that there’s an outsized reward in the distant future.”

Where does the bill currently stand in the legislative process?

Typically, in order for a bill to pass, a representative must first sponsor the bill before it is then assigned to a committee for study. In the event that the committee releases the bill, a date will be put on the calendar to vote, debate, or amend the bill. If the bill passes with a simple majority, or 218 out of 435 votes, the bill would then move on to the Senate.

Next, the Senate can make changes to the bill as is and return it to the House for a chance to concur. At this point, the bill would return to both the House and the Senate for final approval at which point the President has 10 days to either sign or veto the final bill into law.

The Build Back Better Act is being put through the “budget reconciliation” process which requires a 50-50 vote rather than a simple majority. This means that every Democratic Senator would need to vote in favor of the bill for it to pass. There is currently one democratic senator, Joe Manchin of West Virginia, who opposes the bill.

The bill has made it through the first 2 steps of the process: sponsored by a representative, and assigned to the House Ways and Means Committee. It is currently in the process of amendment which began on the 9th of September. If the bill is passed by a majority vote, it will be received by the Senate.

What is the impact of these changes to the bill?

If the intention of these changes to the bill is entirely in the effort of raising more tax dollars, how much can actually be raised?

The Joint Committee on Taxation released a report on September 13, 2021 that showed the projected revenue in the event the bill were to pass. According to this document, the additional revenue collected by the limitations on certain special rules for section 1202 gains would equal only $5.7 billion over the next 10 years (i.e. ~$570 million per year). In comparison, this equates to less than 1% of the cost of the total infrastructure bill.  Refer to this article for further details.

Moreover, the impact on economic growth must be considered as investors will be less incentivized to invest in new ventures that present high risks if they cannot benefit from the incentives in Section 1202. We think it is crucial that this potentially detrimental impact be studied further before such a change is enacted into law.

CapGains Inc. is following this legislation closely and is forming a coalition to inform congress on the potential ramifications – join us here.

QSBS Expert was founded by a group of entrepreneurs, investors, accountants and lawyers who came together when trying to navigate a QSBS situation of their own. We quickly realized that the regulations left a lot of open questions and the publicly available information was confusing to sift through…so we thought that others may also benefit from having a “go to” resource for all things QSBS.

Trying to determine if you’re eligible for QSBS?

Take our eligibility quiz to see if your company could be a qualified small business!